We can guaransheed that ball don’t lie while wearing these Air Force 1 High Sheed Think 16s on the court. The first drop in Nike’s 2018 “Art of a Champion” campaign, these sneakers celebrate the legendary Rasheed Wallace and his NBA Championship run with the 2003-04 Detroit Pistons. They come in a PE-inspired white and bluejay colorway, sporting a white-based patent leather upper with blue accents and the “Sheed” logo embroidered on the heels. Known as the “Rude Awakening” edition, they draw inspiration from Wallace’s performance in Game 4 of the 2004 NBA Finals. 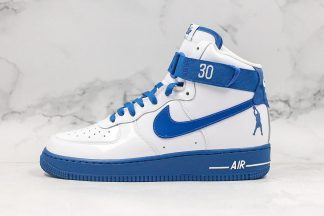