Nike Air Force 1 Euro Tour
Color: White/University Red/Midnight Navy
Style Code: CW7577-100
Often drawing from music for inspiration, Nike’s latest stop in their “Euro Tour” infuses the edge of hard metal into the Air Force 1, tweaking the swoosh by a small though still appropriately distinct margin. Effectively shifted by a small angle, the logo is likened to lightning bolts — a signature in the aforementioned genre — and dyed entirely red. Elsewhere, the leathers set the tone with white shading, only a small, equally understated miniature check adding further detail. At the heel tab, the pair applies the typical “Nike Air” in navy while the tongue opts for something much louder as it uses the same concert motifs against a backdrop of metallic silver. 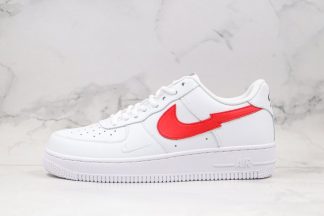