Lately, the Nike design teams have been approaching their Air Force 1 Low with an experimental mindset as they’ve altered the classic silhouette with removable velcro patches, glitchy block midsoles, and hemp uppers for their upcoming Stussy collab. Showing their penchant for modernization once more, the Swoosh crew is soon releasing the AF1 with cut-out Swooshes, and extended pull tabs. While we’ve seen the former recently, this upcoming variation instead crafts its Swooshes with ventilated mesh as opposed to carbon fiber. So far, two colorways have been revealed, both of which feature neutral-toned backdrops and vibrant trimming. The first presents a bright combination of angelic base layers/midsoles accented with royal blue branded hits/tabs, while the second is a mixture of pitch black leathers, sole units, and orange hits. While not associated with the MLB, both pairs are interestingly styled to match that of LA Dodgers and SF Giants colors, a notably rivalry amongst baseball’s National League. 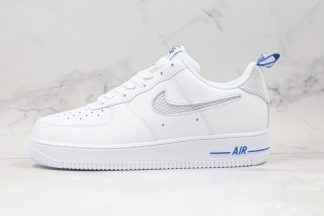