Nike Air Force 1 LX
Color: Summit White/Summit White-University Red
Style Code: CI3445-100
Currently in its 38th year, the Nike Air Force 1 is still a hallmark for the Swoosh, even ranking second among the Top 10 Best-Selling Sneakers of 2019 (U.S.). Positioned to continue being integral to Nike’s future, the last decade alone has seen the ‘82-classic reimagined with everything from Flyknit and GORE-TEX to platform midsoles and REACT-cushioning. Sprinkled all-throughout, of course, has been an arguably unrivaled back-catalog full of general and special releases, both carrying on the model’s heritage across generations. Of the former, a newly-surfaced set of the Air Force 1 Low lays out the silhouette’s inceptive blueprint in “Summit White and Laser Orange.” Clad in divergent hues, uppers on this duo are broken up into various panels. Numbered between 1 and 9 individual components protrude ever-so-slightly off the lightweight engineered base and are laden with schematic scribbling and grids. Though both AF1s follow the bare-bones approach, “Summit White” pairs carry out the theme in stark red while its inherently louder counterpart does so in a muted pencil-like grey. Down below, the two round out their designs with plain respective white and grey soles. 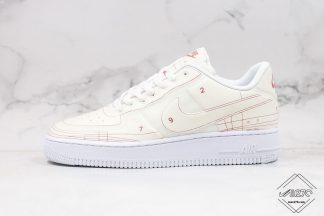