When news of the original Nike Air Max 90 “Laser Blue” retiring for the silhouette’s 30th Anniversary hit the Internet, fans across the world became excited. And while the Air Max III (as the model was originally named) has only launched in Europe, stateside enthusiasts have been treated with other options from the Air Max family animated by the vibrant blue hue. Identical to a recently-surfaced Air Max Plus, a forthcoming Air Max 90 indulges in a predominantly “Black” ensemble ever-so-slightly animated by “Laser Blue”. Unlike its original counterpart, the forthcoming pair only features the titular shade across “NIKE AIR” and “AIR MAX” branding on the tongue, heel, sockliner, and profiles. The remaining components, save for the visible Airbag, boast the dark, tonal arrangement; underlays, however, deviate from heir standard mesh construction in favor of an ostensibly nylon alternative, which also appears on the tongue. Waffle-like tread rounds out the pair in all-“Black”. 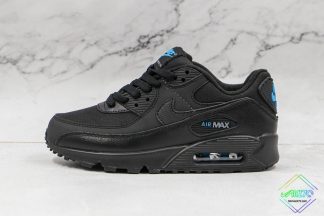