From a design standpoint, the shoe’s upper is constructed of tumbled white leather with a midfoot Swoosh that originates in a black rectangular box — a clever nod to checking off one’s ballot. There’s also a red fabric “Vote” tag hanging from this Swoosh under the collar, and the heel’s Staple Pigeon graphic is sporting an Uncle Sam-style red, white and blue hat. Unique markings appear on the tongue and heel alike, with the former featuring a hybrid Nike Swoosh/Vote graphic and the latter spelling out “SRGN.” Insoles feature an all-over red, white and blue print inspired by voting stickers. This collage is replicated under the translucent outsole, and for a final pop of detailing the shoes arrive with a special “Vote” hangtag. 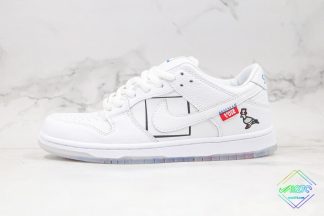