Chinese culture has a very special place in the illustrious lore of the iconic Air Force 1 silhouette. Over the years, various China-inspired iterations of the AF1 have delighted the masses, the likes of numerous Chinese New Year selections as well as 2015’s Nai Ke Air Force 1 High designed for the Chinese market. Now, three years later, the Swoosh is back with another Nai Ke AF1 High that comes inspired by the architectural marvel that is Shanghai’s The Bund. The Bund is a mile-long stretch of shops and restaurants along the Huangpu River that is known as a “museum of buildings” due to its numerous architectural stylings from Gothic, to baroque, and many more. This particular rendition of the Air Force 1 Nai Ke opts for a creamy tumbled leather upper with an iridescent midfoot Swoosh and ankle strap as well as hits of brown leather on its lace dubrae, heel, and tongue. Chinese characters arrive on its insoles, tongue, and heel as well to further the inspiration. 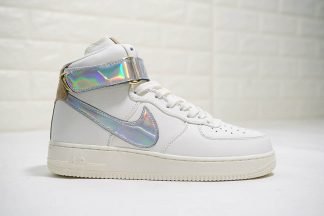