As the 2019-20 NBA Playoffs continue inching closer to the Finals, its organization and Nike are (unofficially) revealing a concept-driven collection starring the beloved Air Force 1. Previously seen in a classic white makeup, the High has now appeared in a shade of green reminiscent of the Boston Celtics. Leather construction on this take of Bruce Kilgore’s 1982 design are clad in an arrangement akin to Nike SB‘s “State of Liberty” Dunk High from 2011. Each overlay features yellow edges, although the lateral profile swoosh also indulges in a shimmering gold accent representative of the in-game jewelry banned by the League. Just like on its Air Force 1 Low counterpart, this tall sneaker sports an upside NBA logo just underneath the tongue as a nod to the once-staple of players like Rajon Rondo. The Air Force 1 High, however, ostensibly recreates the League’s preferred orientation for the headband given its co-branded ankle strap. Elsewhere, bright green panels at opposite ends of each shoe’s heel mimic the styling and color of kinesio tape (or KT), an elastic therapeutic solution that exploded in popularity after the 2008 Summer Olympics in Beijing and previously utilized by Carmelo Anthony and James Harden; black spines and heel overlays are equivalent to a player’s shooting sleeve. Underfoot, the white midsole/gum brown outsole combination may commemorate TD Garden’s famous parquet floor. 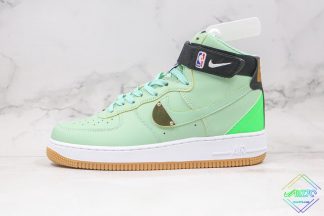