Nike Air Force 1 Low Back To Schoo
Color: White/Hyper Crimson/Bright Cactus/White
Style Code: CZ8139-100
2020 Newly released is this multi-accented pair Air Force 1s that interestingly elicit memories of a certain group of Bikini Bottom residents. Its rear paneling is surely its most eye-catching section as it sports all-over graffiti-like Nike branding which some can even argue look very similar to the SpongeBob “A Few Moments Later” font. While not officially tied to the animation series, elsewhere on these AF1s you’ll find Nickelodeon-esque accents dispersed throughout the orange mesh throats, under-stacked Swoosh logo and heel branding, yellow treading reminiscent of Mr. Squarepants himself, and bright blue shoe strings that channel Squidward vibes. 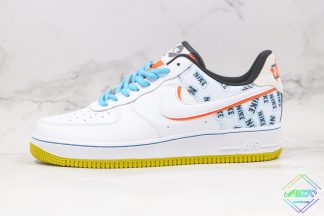