When people think of the most popular areas for sneakerheads, the mind tends to associate the collection of mass amounts of footwear with the United States, Asia, and the larger countries in Europe. Most region-exclusive drops tend to go down in those areas, and they usually get most of the spotlight. That being said, the well-known locations are not the only sneakerhead havens, as the Philippines for example is criminally underrated as one of the globe’s hotbeds for sneaker and streetwear culture. In the past, we have seen their love for the game of basketball take shape in the form of special edition LeBron shoes, and now their adoration for the culture is culminating in an Air Max 270 that boasts a look similar to the Filipino flag. While not officially associated with the Western Pacific Island, this white, red, blue, and yellow color scheme is eerily resemblant of their dual-striped banner meant to stand for bravery and patriotism, with a white triangle taking shape for peace, and a golden yellow sun and stars mimicking the country’s three main divisions. 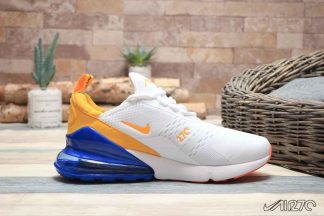