Nike Air Max 90
Color: White/Red Orbit/Psychic Purple/Black
Style Code: AJ1285-106
The Toronto Raptors are enjoying their finest season as an organization, one that’s culminated in a trip to the NBA Finals, and by either impeccable timing, fortuitous foresight, or just good old coincidence, a Nike Air Max 90 with a Raptors-esque palette has appeared just in time for tip-off. Pops of purple and red appear all over the white and black base, with the former appearing on the eyelets, midfoot, and heel, while the latter joins in on the eyelets, christens the midfoot Swoosh, and also provides contrast on the midsole and Air Max cushioning unit. A large black mudguard then seemingly splits the shoe in half, adding further to the layered look. 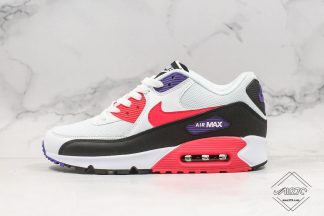