Nike Air More Uptempo 720 QS
Color: White/Chrome-Black
Style Number: BQ7668-100
Price: $200
Combining a ’90s basketball classic made famous by Scottie Pippen with the Air Max 720‘s cushioned sole, the Nike Air More Uptempo 720 is a masterful maximalist mix of the Swoosh Brand’s past and present, and it’s now surfaced in a new chromed-out makeup. The Air More Uptempo upper is constructed of a crisp white leather with black trim and black branded accents on the toebox/heel. This simple base was constructed to allow the aforementioned silver chrome accents to stand out as loudly as possible, and stand out they certainly do, appearing on the Uptempo’s signature “Max Air” overlays while also wrapping all the way around the heel. Down below, the translucent 720 cushioning unit is sheathed in between a light blue plastic clip and a grey outsole to complete the look. 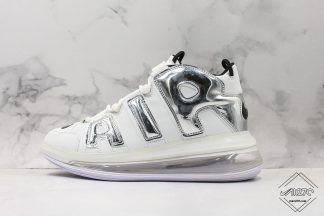