When it comes to Nike’s extensive line of running sneakers, the brand often invites artists to lend their creative visions. For its ongoing Artist In Residence (A.I.R.) series, the Swoosh recruits UK-based artist Kelly Anna London to take on one of its newest silhouettes—the Nike Pegasus 38. Recognized for her powerful, silhouetted figures that are often connected to sports and body positivity, London indulges the performance trainer’s black mesh uppers in colorful, haphazard shapes and figures that seem to be a modern twist on Henri Matisse’s work. The hues used in her patterns are also applied elsewhere, such as the pastel green used on the lateral side’s oversized Swoosh outline and the laces. Additionally, a royal blue colors the lace loops and the inside. A midsole with a design that’s just as busy as the uppers’ rounds out the look, as the React foam and Zoom Air-cushioned unit features black paint splatters on a white base. 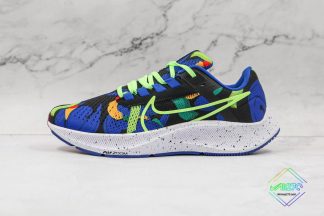