The 2005 release of the Stussy x Nike SB Dunk Low “Cherry” colorway was inspired by neapolitan ice cream. As the first company to collaborate with Nike on creating new colorways, Stussy’s roots are deep. By the time 2005 rolled around, Stussy had already worked with Nike on a handful of projects, including a Nike Dunk High in 2001, so the “Neapolitan” Dunks were quite literally the cherry on top of their already successful partnerships. Using neapolitan ice cream–that’s a mix of chocolate, vanilla and strawberry ice creams for those that are lactose intolerant–Robbie Jeffers of Stussy was able to layer the colors inspired by the flavors onto the Nike Dunk Low Pro SB. The toe box surround, heel, lace eyelet panel, and accenting panels were covered in Dark Khaki (chocolate), the toebox and side panels were covered in Shy Pink (strawberry) and the Swoosh and tongue label were done in an off-white Vanilla color. The final details of the Stussy Dunk Low Pro SB came in the form of a waffle cone insole design and a cherry stitched into the over stuffed tongue’s label. The Stussy x Nike SB Dunk Low “Cherry” released as a part of the Team Manager series from Nike SB, which also featured iconic designs like the Tiff’any SB Dunks. 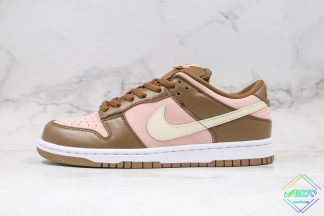