The pair of sneakers clanging around in the washing machine is not going to come out any cleaner. The shoes, which have already been doused with coffee and motor oil, are not in there to be rinsed, to be made new again. Quite the opposite, in fact. They are pressed together in a laundry bag, locked in a centrifugal embrace with spare nuts and bolts that beat into their leather and wear them down while the cycle winds. The abrasion is the point.
The shoes belong to Nike SB’s latest collaborator, Magnus Walker, who is a difficult character to explain to the uninitiated. Based only on looks he could be a wizard, a shaman clutching a staff, were it not for his flannel and head-swallowing beanie. His name is more fitting for a hero in a roleplaying game than a man releasing his own pair of limited edition Nike SBs. And yet, despite appearance and moniker, his history with the brand runs deep.
“As a kid, I was a runner, cross-country middle-distance runner,” Walker says, “and this is going back to the late ‘70s. And I used to run in some Nike Waffles, and at the time, one of my childhood heroes was Sebastian Coe, who was a Nike athlete.” 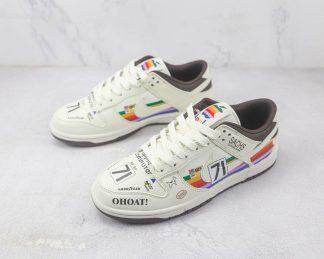