The Air Force 1 was certainly one of the most notable, touting a vivid “University Gold” colorway. After LeBron got early dibs months ago, it seemed an official release was just around the corner. But due likely in part to delays, we’re now looking at a possible July launch. In design, the pair doesn’t stray too far from the options previous. A triple yellow look runs from the toe through to the heel, dressing the midsole, lining, and laces alongside. “AIR,” then, marks atop in the usual bold Helvetica, while the Swoosh just spaces up flaunts a silver metallic foil stitched down by deep black threads. 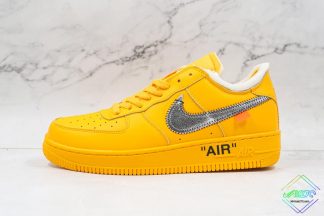