Off-White x Nike Air Max 97 OG
Colors: Off White/Wolf Grey/White/Menta
Style Code: AJ4585-101
Release Date: November 2018
Off-White and Nike’s “The Ten” is set to debut its second part later this year, Many silhouettes from the original collection will be reused, this time utilizing different colorways. For 2018, Off-White and Nike have created two colorways set to release later this year. The first follows most of the unacknowledged “guidelines” of Part 2, which entail reversing the original collaborative colorway to its opposites, like white to black or black to white. This can be seen in the more understated Off-White Air Max 97, as the entire shoe retains the white base from the original, although this time the pair will be infused with a new color called “Menta” which is similar to a minty-green, only darker and more pronounced.
Share for Discounts 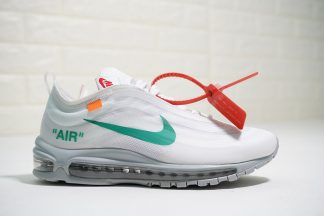