Color: BLACK/WHITE-UNIVERSITY RED
Style Code: AQ3366-001
Release Date: October 21, 2017
Riccardo Tisci has teamed up with Nike once again, this time revealing two upcoming Nike Air Force 1 High releases.
Coming dressed in either “White” or “Black” color options. Both NikeLab x RT Air Force 1s are highlighted with Red and Blue accents with the a custom logo on the toe box inspired by the iconic NBA logo.
In Tisci’s eyes, basketball players don’t just provide style inspiration, they’re heroes. This latest Nike collaboration plays off this idea with another series of graphics: logos for a fictional team, the Victorious Minotaurs, which gives him the opportunity to envision the collection as part of a true off-court uniform.
“In the 90s, basketball players became kind of like rock stars,” he says. “But now, they are more than rock stars. They’re superhuman — representative of historic mythology.” 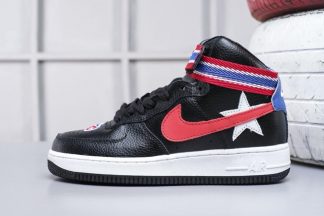