Undefeated x Nike Air Max 97
Release Date: Holiday 2020
Price: $180
The Undefeated x Nike Air Max 97 was a massive success when it first debuted almost three years ago. Released initially during ComplexCon in Long Beach, the sleek 97 dropped in three colorways, tonal white and black with matching red and black “UNDEFEATED”-branded stripes, and the third, Undefeated-exclusive olive colorway, the most coveted of them all. Since then, the white and black pairs have released and restocked, but have never officially been seen again, until now. 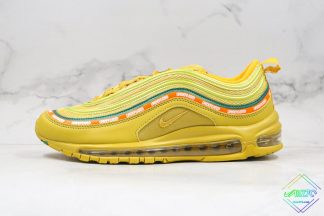