The Nike React Element 87 is a hybrid lifestyle/running silhouette that released June 21st in Europe and later on July 13th release in the US. The shoe features a REACT midsole with rubber rivets drilled in for extra stability and a semi-translucent TPE upper with exposed components for extra flair. This sneaker is considered as one of the best new shoes of 2018. 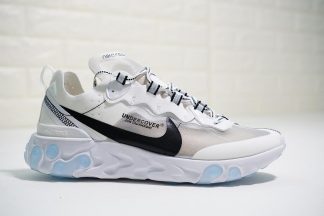