Nike Air Max 2090
Release Date: 2020
Color: White/Concord/Pink Blast/Pure Platinum
Womens: $150
Style Code: CZ3867-101
Effectively the AM90 fast-forwarded two centuries, Nike’s Air Max 2090 first debuted its futuristic design on Air Max Day, its handful of releases an overt homage to the silhouette from which it draws inspiration. And though its since delved into a new set of schemes for its latest, the 2090 is soon to make yet another stop in the past as it begins to reference the OG “Laser Pink” colorway. A replica with new design language, the release cuts as close as possible in color alone. The mudguards along the profile, though just slightly lighter, mimic in grey, layered atop a synthetic film of white. Underneath the latter, Swooshes and accents lines compose of dark blue and the titular pink, respectively, their placement parallel to a lace unit and tongue dress near entirely achromatic. Contrast stitch along the sides, the heel tab behind, and the branding atop the tongue then contrast in the same cool tone as the aforementioned, while its floral opposite hues the front of the tread, the entire heel, and the pull that roots out from underneath the molded heel tab. 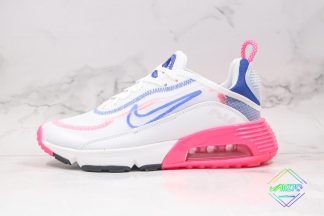