The past stepped into the present amid piles of beads in Millbrook First Nation this weekend.
Mi’kmaw artists Cheyenne Isaac-Gloade and husband Garrett Gloade welcomed young people into a beading workshop on Saturday. 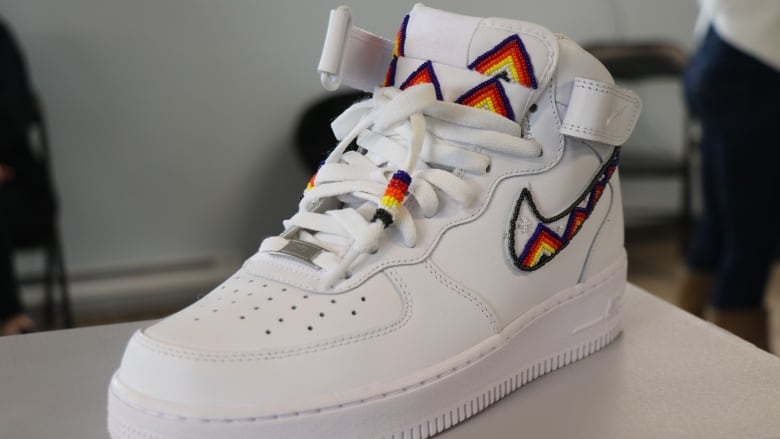 But the traditional artform was given a twist, as they showed participants how to bring Indigenous beading to 30 pairs of white leather Nike Air Force One sneakers.
“A sneaker isn’t something super conventional to bead on, however, we’re making it work,” Isaac-Gloade said Saturday at the Millbrook Youth Centre as the youth worked on their designs.
“We’re kind of applying that Mi’kmaw twist, that art, that Indigenous style to something that is super contemporary.”
Isaac-Gloade said she and her husband have designed two beaded sneakers of their own, and decided to bring in younger people to learn the technique and get them excited about the art form.

Beading is a very old technique passed down through generations as an “ancestral art,” Isaac-Gloade said. It is significant not only to the Mi’kmaq, but Indigenous people across North America, she added.
“I think this project alone kind of is a significant thing in bringing the past and the present together,” she said.
The art has grown over time like many other styles, Isaac-Gloade said, and she incorporates older Mi’kmaw techniques and designs into her own work today.
Holding one of the af1 sneakers she had beaded herself, Isaac-Gloade said she’d drawn inspiration from the 1800-1900s Mi’kmaw quillwork which often featured mountains.

The small white beads represent the sky, she said, while she used vibrant “fire colours” of blue, red, orange and yellow lined up in a sunset pattern for the mountains.
Tehya Milliea, 15, said she wanted to come out to the workshop after seeing Isaac-Gloade’s beaded sneakers.
“I thought it was really incredible,” Milliea said.
Her own sneaker design used shades of blue in a design inspired by her regalia for powwow dancing, Milliea said — although she likely won’t wear them together.
Sipu Julien has tried her hand at small beaded medallions, and thought the workshop would be “cool” to try.
She also used fire colours of red and yellow on her design, “because it’s warm but it’s fast.”
When thinking about what she’ll do with the final project, Julien isn’t sure yet but she might wear them or put them on a shelf.
One of the challenges in moving beading forward is that it’s been “silenced” for some time and there are gaps in its evolution, Isaac-Gloade said, since there were historic periods when Mi’kmaq and Indigenous people weren’t able to practise this art.
Isaac-Gloade said this is exactly why it’s so important to teach younger people the art form, whether it’s contemporary, traditional, or a bit of both.
“We want to see beadwork live on, we want to see our designs live on, and I think the best way to do that is by what we’re doing here today,” said Isaac-Gloade.
Her own hopes for the youth’s sneakers are that they could eventually be displayed in a public space, Isaac-Gloade said, where the stories and meanings behind each design could be enjoyed by lots of people.