An undeniable icon of athletic footwear, Nike‘s Air Force 1 High has shifted sneaker culture immeasurably since its original release in 1982, and is still going strong nearly four decades after its initial release. In that time span, Bruce Killgore’s legendary creation taken on a veritable myriad of different styles, and now it’s amplifying its branding with a bold new L.V.8 3 style dressed in a “White/Black” color scheme.
Any Force fan is surely familiar with the heel’s foxing, which surrounds embossed “AIR” branding with a line that swoops around the heel and heads towards the midfoot. Here, that line and graphic hit are dressed in black and doubled, present in their familiar place on the midsole as well as moved up onto the heel. That’s not all though: the inner tongue tag is cloned and brought to the outside of the tongue, where it falls all the way down the throat in repeating fashion before coming to rest on the toebox.
This technical embellishment is dressed in black, as is the extra Nike Air Force 1 branding on the tongue attachment and heel. A little more black graces the proprioceptus belt’s hooked closure system, and the entirety of the upper’s base is presented in plain white leather to ensure all these accents stand out as much as possible. 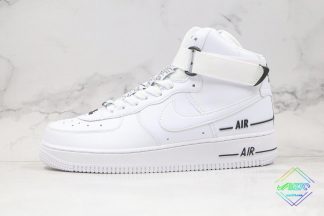