Having imported a tech-y, “Utility”-style aesthetic to many of their classic models over the last few months, it was only a matter of time until Nike gave the Air Force 1 High a rugged makeover. That time has arrived, as a two-pack of modified Air Force 1 Highs have now surfaced: a white/black and a soft pink/rose gold. Both pairs keep the shoe’s original bulky, high-cut aesthetic and leather upper intact, but add a cornucopia of interesting embellishments: a large wavy heel tab adorns both pairs, and the throat is modified as well with a raised eyestay, metal eyelets, and extra-thick flat laces. New-age branding is present too, with a bold “FORCE” hit appearing on the front of the strap, the tongue tags turned inside-out to show care information, and a small Nike Sportswear hit on the lateral forefoot. For a finishing pop of OG style — and a nod to the genesis of Force — retro cream accents appear on the midsole of both pairs and the swoosh of the white/black colorway. 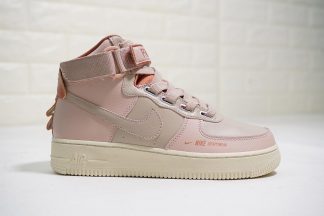