Nike Air Flight 89
Color: White/Medium Olive Green-Black
Style Code: CJ5390-101
Despite returning November 2019 after a three year hiatus, the Nike Air Flight 89 had kept rather quiet up until the last two months. Over this time, the late ’80s basketball icon has dressed up as the Chicago flag for NBA All-Star Weekend, paid homage to the Rucker Park-held Entertainers Basketball Classic and visited outer space via its “Planet Of Hoops” arrangement. For its latest, however, the Jordan 4-relative keeps things simple with “White/Black/Medium Olive” colorway. A faithful reissue of the original, the upcoming Air Flight 89 is constructed with a leather and synthetic upper, clad in “White” on this iteration. Profile Swooshes join branding across the tongue and heel, laces and collar lining in creating a yin-and-yang scheme. Down below, most midsole tooling and the entire outsole also partake in the monochromatic palette, but “Medium Olive” interrupts the former. Elsewhere, the drab green hue trims the quarter panels at the side and molded eyestays near the base and at the top of the tongue. 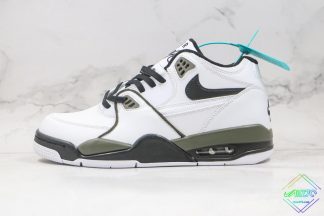