The Nike Air Pippen 1, Scotty Pippen’s first signature basketball shoe, was first released in 1997 and features a full Air Max sole for better cushioning. The Pippen 1`s were designed by Aaron Cooper, on of Nike`s classic basketball sneaker designer and the man behind several of Chicago`s number 33`s signature shoes. This “Wheat” retro model has the Pippen logo engraved on the tongue as well as the back and comes in a wheat coloed nubuck upper. The Midsole is kept in a light grey tone (peep the Swoosh on the side and the Air logo on the back), while the gum outsole rounds off the shoe. 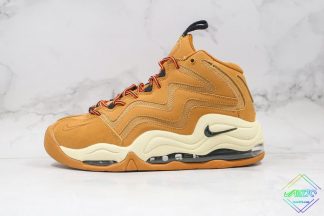