Nike’s efforts to provide footwear qualified to battle against inclement weather have continued to generate many new makeovers and models over the course of this Fall/Winter season. Many have undergone materialized upgrades with the the help of GORE-TEX membranes, while some have appeared in completely reworked models such as the Air Force 1 High Shell. Having only released in a trio of colorways thus far, its newfound silhouette is gaining another member to join its weatherized lineup, arriving with a full volt-colored exterior. Easily the loudest installment of its kind, Grinch-like hues envelop its full water-resistant base layers, leaving the only accents in sight to contrast through notes of bronze placed atop the branded embellishments found on the lateral/medial panels as well as the exposed stitchings that line the heels. The sole regions down below deviate from the upper as they display a slightly darker green, and almost give off a slimy/glow-in-the-dark element. 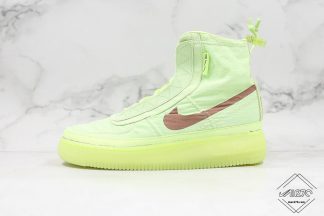