Nike Air Force 1 High ’07 LV8
Color: Olive Aura/Total Orange/Olive Aura
Style Code: CJ1385-300
Never one to rest on its laurels, the Nike Air Force 1 High has recently borrowed the “over-branded” look first having appeared on its shortest counterpart. Like the Air Force 1 Low trio that introduced the excessive aesthetic, this iteration of Bruce Kilgore’s ’82 design boasts a tonal leather upper. The High’s Olive Aura arrangement, however, extends onto the adjustable ankle strap missing from low-top silhouettes. Total Orange works in tandem with the aforementioned drab green hue to create a scheme reminiscent of military garb. This citrus shade, which also recently appeared on the Air Max 90, further emboldens the already-bold over-branding up the laces and at the lateral heel. White midsoles and their accompanying tread nod to the Air Force 1‘s heritage to round out the pair.
Soft “Olive Aura hues coat the leather upper, mixing with vivid pops of “Total Orange” for a lighter, less militant combination than most previous “Flight Jacket”-style kicks. Orange hues mostly grace the new-age accents like the repeating tongue badge that tumbles down the throat, the doubled-up midsole detailing that’s pushed up on to the heel and the raised plastic Nike Air graphics on toebox and heel alike. Olive laces and an olive proprioceptus belt with a touch of orange detailing secure the wearer’s foot. A traditional white midsole and white outsole with one final strike of branding completes the look. 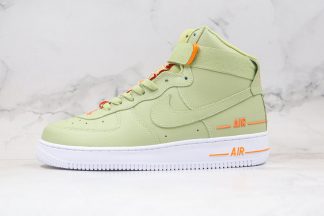