Before the Nike Air Force 1 Low celebrates its 40th anniversary, it’s celebrating the “First Use” of the iconic swoosh logo it helped make globally-recognizable. Having already appeared in a commemorative “University Blue” style, Bruce Kilgore’s 39-year-old design has emerged in a thematic white, off-white and orange colorway. As with the model’s most popular style, the forthcoming pair indulges in white smooth leather throughout the base of its upper. Suede light cream overlays deliver contrast to the storied design, working in-tandem with citrus-flavor accents across the profiles, tongue and heel. Akin to previously-surfaced propositions from Nike Sportswear, text branding on the Air Force 1‘s tongue and heel don a vintage lowercase script aesthetic, while swooshes on the medial side mimic original designs by Carolyn Davidson. Underneath, the date on which the logo was first used is printed: “June 18, 1971”. Sole units don’t partake in any commemorative nods, in favor of an all-white, semi-translucent finish. 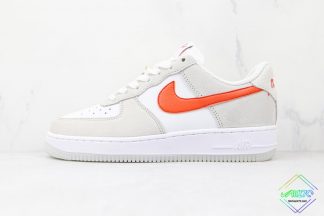