Ever since Nike reconnected with the NBA, the duo has delivered a bevy of officially licensed options of some classic kicks. With the Cortez, and more so the Air Force 1, the world-renowned names have added their fair share of tweaks to the classics such as simple NBA insignias, team logos, and colorways — and even French colors to commemorate the first-ever overseas regular-season game. Their next up release — another edition of the “NBA Pack” Air Force 1 — looks to be their most experimental yet, with altered materials, added overlays, flipped branding, and taping all featuring on this fashionable Air Force 1. But it’s not just for design purposes, with some element referencing the NBA’s banned on-court accessories.
Gold plating at the Swoosh nods the league-wide ban on on-court jewelry, while flipped NBA logos showcase how ballers would once wear their headbands upside down — a now-banned move by the Association. Finally, duct tape on the rear branding is a direct reference to both JR Smith and Lonzo Ball, who had to cover up their branded ink on the court. Many options of Highs and Lows have already surfaced in this aesthetic, with the latest here, a High, complete in crisp white leather, black straps, and timeless gum rubber outsoles. 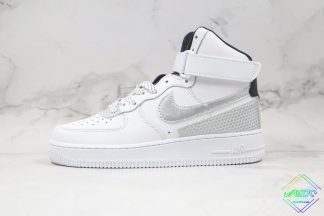